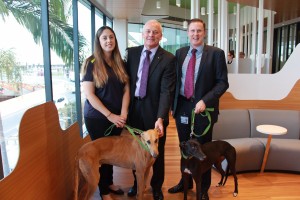 The Commission returned its final report on the greyhound racing industry on 1 June, 2015. The report recommended a number of changes, including the separation of the commercial and integrity aspects of the industry. This recommendation would allow Racing Queensland (as a control body) to concentrate on the business of racing, and a newly formed Queensland Racing Integrity Commission (QRIC) would focus on ensuring integrity within the industry.

P2E have been instrumental in working closely with Commissioner Ross Barnett in the establishment of the newly formed Queensland Racing Integrity Commission which began operation 1 July 2016.

Queensland Racing Integrity Commission (QRIC) is an independent statutory body which oversees the integrity and welfare standards of racing animals and participants in Queensland. QRIC was established by the Racing Integrity Act 2016, report to the Minister for Racing and are accountable to the Queensland Government under the Financial Accountability Act 2009.

QRIC work in partnership with the industry to monitor racing activities, uphold the Rules of Racing and safeguard the welfare of racing animals to make sure that everyone has the opportunity to compete on an even playing field. We’re here to contribute to the ongoing success of the racing industry in Queensland.