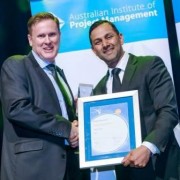 P2E Director of Client and Service Delivery Mr Todd Hunt finishes off a great 2014 being awarded a High Commendation for Project Director of the Year at the National Project Management Awards night held in the Brisbane Convention Centre 14 October 2014. The night was celebrated by P2E staff and family members. Todd Hunt stated that the award would not have been possible without the efforts of the QPS Renewal Program Team Executives, the PMO Team Members and most importantly the 20 Program Managers, numerous Project Managers and their respective teams. Todd also thanked his amazing wife ‘Lyn’ for her patience during the Program, given his limited time at home.